The Wandering, the Directed, and the Coerced Mind: A note on satisfaction, optimal learning, and oppressive strain. 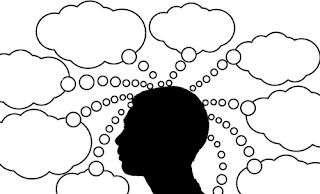 I've been thinking about wandering attention: when it's a gift, not a diagnosis. This led to some thoughts about three states of choice and some of their implications.

1. My favorite state. I'd wager yours, too: Being free to follow the whims of the moment. A period of flexible, easily revisable interests and choices without dire consequence. A state free of desperation.

2. Here's what I think for most of us is our usual state and a strategy optimal for learning.  Most of time there are assignments we've taken on; something on the agenda. When time is limited, and it's always limited, my advice is first attend to what is most interesting.  This is my favored learning strategy. My second strategy if the task, at the time, is too daunting and you can get away with it: Find another mission with a greater expectation of satisfaction. (I'm a fan of playing hooky).

3.  This one I hate.  It’s potentially pathological: Circumstances that distort, constrain, or coerce the capacity to attend much else. Practically speaking, this is when we feel we have no choice.  We are compelled –– held in place. This is the case when there is a sense of jeopardy. It can come from inescapable circumstances and/or unyielding personal values and priorities. Here the stakes are high, our first priority. If failed, we expect trouble. If we succeed, we might feel relief. We’ve dodged the bullet.

My clinical work is frequently with people who find themselves in this third condition, people feeling strained and unhappy by needing to constantly think about things they'd rather not. Often what they feel is at stake is the integrity of honoring what they take to be vital commitments.  It becomes a matter of character for them.  They are never on vacation.

Realistically, most of what we do is neither freely chosen nor coerced. The choices we have are bounded by the available options and our priorities. We find, choose, and accept one mission after another. Think of being in school, months before summer break.

A reminder. The satisfaction of following one's whims is a luxury, similar to Maslow's recognition that creative growth is more likely after survival needs are met. Another way to put this: Desperation and adversity rarely brings the best out of us. Mostly, it makes us mean, anxious, and depressed. It's hard to learn, create, and prosper under the gun.


Here's some examples of states one and two:

At the moment, happily, I'm on vacation.

Vacation involves the time and place to follow one's whims free of desperation and coercion. The missions are chosen for their potential to satisfy. Time to play and have fun, at times, just to be.

Early this week, anticipating a break from my usual highly structured schedule, I told myself I'd spend Saturday focused on my half-finished chapter, Language and Verbal Behavior.  I've a book due and a clock ticking. But when the day came, not finding the energy to work on my self-assigned chapter, I reassured myself I'd find the time, later.  Even remembering the fable of the ant and the grasshopper, I chose to hop about. My slogan of the week: "Sometimes be the grasshopper, sometimes be the ant. But don't count on the ant bailing you out".

So, I woke up Saturday knowing Verbal Behavior would have to wait. After all, it was Saturday, so rather than move to my study, I went for a walk and enjoyed the first of fall's sunlight.  Finally, near sunset, I was in the mood to summarize what I'd been mulling over. During the walk, I had been remembering a conversation with a friend concerning Csíkszentmihályi's concept of "flow", and about the interesting things that might get captured in the current.

The conversation had started with concerns about my teaching. My students are assigned far more than they can possibly read and end up reading far less than they should. With that in mind, I advise them to first read whatever interests them most. They should at least get that done. I suggest they prioritize what they authentically value. This is a variation of telling them to play their strengths. It's probably good time management advice. They're not going to read all they are assigned, they never do by half, so they should start with what might help them assimilate additional knowledge. I'll explain why below. (And since they've paid a pretty penny for school and are required to take the course, I suggest they start with what fits who they already are, with what they already enjoy. I give them a choice within the constraints of the lesson I am contracted to teach.)

If they have the requisite competence, what they find most interesting will stick with them better than if they struggle with their lack of interest. I tell them that the knowledge and skills they actually value will naturally assimilate additional knowledge and competence. I'm sure I'm often right about this. I'm vindicated when they end up surprised by the unexpected themes that became intriguing owing to its relation to their initial interest.

I offer them the image of a seed crystal that enlarges as it attracts kindred content, and a complex rock's fused assimilation of component minerals.

This sort of learning works like a love triangle. When I teach Freud, I point out this is how his Oedipus Complex can be understood. It begins within the mother-infant dyad, with a dependent infant enthralled with desire for mother. Eventually, as infants grow, they notice mother's significant interest in father, and in so doing, learn more about him and what he stands for. It starts with the dyad and then moves to the triangle. (Mothers have their version of this triangle that starts with what Donald Winnicott aptly called "primary maternal preoccupation").

Our most vital understandings often start with a focus on someone that fascinates us and then turns to what fascinates that person.  Or we start with something we find compelling, and then turn our attention to other things that connect to that.  I know much of my education happened this way, starting with an idealized teacher and then expanding out to learn what that teacher found worthy.

Peter Ossorio has a set of maxims regarding value and behavioral choice that frame some of this behavioral logic:

If a person values a specific something, e.g., an object, a circumstance, a behavior, or, more generally, a state of affairs, they will thereby also value other specific things of the same kind to the extent that they are relevantly similar to the original.

If a person values a general something they will thereby also value a specific something to the extent that it is a paradigmatic instance or realization of the more general value. (Place, 1998/2012)

None of this is particularly helpful for students when they are taught to read for the test.  And for those who do not intrinsically value any of their academic subjects, my advice falls flat. They might as well follow whatever order the syllabus provides.

Now to condition three.  Consider another truism: Coercion elicits resistance or resigned compliance.  In my clinical practice this shows up in symptoms of chronic anger and depression.

A couple of examples:

I work with a devoted mother, who is often distressed and exhausted from spending an epoch relearning algebra and studying the life cycle of snakes and snails. It is important to her to be generally available and assist her children with their homework and idiosyncratic pastimes. She knows this will go on for decades. In an ideal world, she'd be free to think about other things, ideas that intrinsically please her, that challenge and enrich her considerable intellect. But she accepts that her consuming duty to her kids does not allow the time or energy to pursue much else. At least not now.  Her domestic obligations, vital and valued, are performed without fail but are implemented through forced attention to her children's needs that require attending some things she'd rather not entertain. This tragic and noble conflict comes with her vision of motherhood.  A lot of life is like this. The life cycle comes with demands. But she keeps faith that in the future she'll return to the other possibilities that also fit her. I expect she will.

Another person I see struggles with the burden of fulfilling his parents' obligations.  He is in a constant state of demoralization, stressed to exhaustion, unhappy, and painfully depressed.  He sighs, "when can I return to my life".  In my sessions with him, I first didn't understand, and unhelpfully thought, "this is your life until you do something else and reorder your priorities".  It finally dawned on me what he meant, what he desperately wants me to understand:  "When can I have my own thoughts, the one's the come from me naturally, what I'd turn to if I wasn't so goddamned under the sway of parental ghosts, and my family's unfinished business".  Resentfully obliged to hold the family purse strings, he's become his sisters' keepers, obligated by a trust and a mix of competitive revenge.  Making matters worse, despite his sisters' inept and sleazy ways, they were clear parental favorites. He says he would rather have other priorities but demonstrating to his dead parents that he is the worthy one keeps him enslaved. This tangled narcissism is a tough knot to loosen, let alone untie.  Here his character, his sense of integrity, is also his disorder.

Sometimes out of compensation, revenge, competition, or just sheer duty, we value something so much that when the opportunity or dilemma arrives, practically speaking, we can't attend to anything else.  We don't have the time or head space to manage it.  And it comes with a terrible sacrifice of freedom. Like finding a beast in the corner of the room, unless we escape or are eaten, we've no real choice where to focus.

Unlike that tired and burdened mother who will someday launch her children, some obligations even when fulfilled, are pyrrhic victories at best. Some values are an occupying force that colonize one's mind.

The noted scholar of love, Marvin Gaye, had some things to say about preoccupation: Too Busy Thinking About My Baby

But sometimes, Mose Allison reminds us, your mind is on vacation but your mouth....