The Man in the High Tower: Thoughts on Accreditation Ceremonies and Trump's Narcissism.

An unhappy followup to Burning down the house: Trump, mobs, and narcissistic rage .  Apologies to Philip K. Dick. 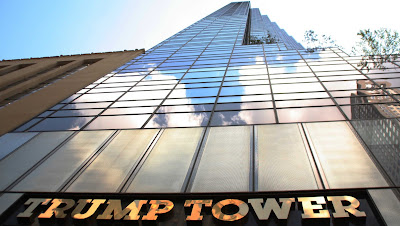 Trump is president-elect. Where do we find hope?

Our Alt History, The Man in the High Tower, opens with an unmoored executive branch, a broken one party Congress, and the absence of a working Supreme Court. The sequence starts with adoring crowds gazing upward at a towering glitz then pans to brown faces hidden behind drawn shades. Interspersed are headlines, The Markets Wobble, and night vision shots of Russian irregulars crossing borders, and in Massachusetts and California people too stoned to hear the loud knocking on the door.

So where can we find hope when the world's most significant Accreditation Ceremony degrades practically everything so many of us value?

Parallel to a Degradation Ceremony’s denouncer, witness, and perpetrator, an effective accreditation requires the witness of a community that shares common values, an affirmation of the newly accredited, and an acknowledgment by the affirmed.  If there is a glimmer of hope it might come from Trump's narcissism and the people who support it.


Trump's thin-skinned vulnerability might have a mitigating upside that comes with his continuing need for admiration.  Caught now in the sticky web of dysfunctional government, soon to be hearing  “show me the meat”, where will he turn?  For months, Trump's closest circle’s been sycophants skilled in dark and nasty branding, successfully marketing his off-message rants as manna from heaven.  In the corridors of power, that message will not fly. There will be no wall, no mass deportations, no religious bans.  He will have to stop grabbing pussy. But, unless he's a fundamentally changed man, an unlikely possibility, he'll still need his narcissistic feed or face his emptiness. He won't be hanging out with his about to be betrayed base.  Soon enough, they'll know they've been screwed again.

He’ll need skilled operatives to manage the machine and will require their adoration. He'll need to feel respect from significant international players. Whoever these folk turn out to be, this is where he'll turn. Let's hope he's not an ideologue committed to the darkest desires of his base but a brilliant manipulator with an unquenchable thirst for admiration.

It will boil down to his inner circle of advisers. Let's hope he has more in mind than getting the trains to run on time.

We have no real choice but to stay tuned.

Looks like POTUS, LLC a division of The Trump Empire, is his bottom line. That, and filling his narcissistic void. I posted this on Facebook after reading that Trump will not go after Clinton and sees no illegality, ethics aside, in attending to his businesses while in the White House.

"Smart move to normalize Bannon and distract from what should actually outrage. Clinton was never going to be prosecuted. Trump's masterful manipulation with his misogynistic rant excited hate and now its retraction will appear presidential. Meanwhile, his abortion of liberal democratic and cosmopolitan values runs rampant. His goal, a nepotistic kleptocracy. A derailed focus on his corruption will continue hardly checked. He'll seem more human when he concedes that he can't deport the 11 million and that Muslims have Constitutional protection. Unless he profits from the concrete, the wall isn't going to be built. Looking for eight years, he'll keep the Democrats in line with infrastructure pork and maintain his alliance with Republican reactionaries by appointing to SCOTUS judges who take a primitive Federalist view of the Commerce Clause. Hello state's rights, goodbye voter rights, LBGT protection, Roe v Wade. Inequality will widen, dynasties will prevail, and the white lower middle class will remain screwed. Meanwhile the slime that's slithered out from under the rocks will comfortably don their hoods and find it much easier to recruit. I hope I am so very, very wrong.".

A lie told once remains a lie but a lie told a thousand times becomes the truth.  Joseph Goebbels

Effective propaganda rests on the absence of a free press and the constant promotion of "alternative facts".  Discrediting the independent press is an effective first move to enforce propaganda and indoctrination. Spicer and Conway are Trump's tools of fascism. They've started to silence the watchdog agencies. They cannot tolerate independent credible voices. Given our low information, post-fact and angry population, this will work well for Trump's base. It got him elected.