A person's power and disposition to make effective choices reflects their appraisal of the relevant circumstances.  Beyond choices that are objectively unavailable, people engage in the world with the additional blinders of what they are reluctant to examine and what they find intolerable or unthinkable to know. As a psychoanalyst, part of my job is to help make the unconscious conscious. Sometimes I accomplish this, but more often what I actually attempt is to make it safe enough to tolerate examining what my client is deeply reluctant to examine and negotiate. This requires considerable empathy from me and courage from them.  They have their good reasons to be defensive.

Bad faith, self-deception, and unconscious motivation restrict a person's ability to see their world with clarity and make informed choices. Action is compromised when a person's vision of their overall circumstance is defensively restricted. Ethical and aesthetic judgments that require or are enhanced by deliberation are undermined when relevant options are unacknowledged. Undoing self-deception in the service of enhancing judgment is vital when ethical concerns and matters of fairness or justice are at stake. Pleasurable opportunity and prudent restraint are also undermined when a person's recognition of choice is unnecessarily restricted.

Here's a map of bad faith, self-deception, and unconscious motivation. 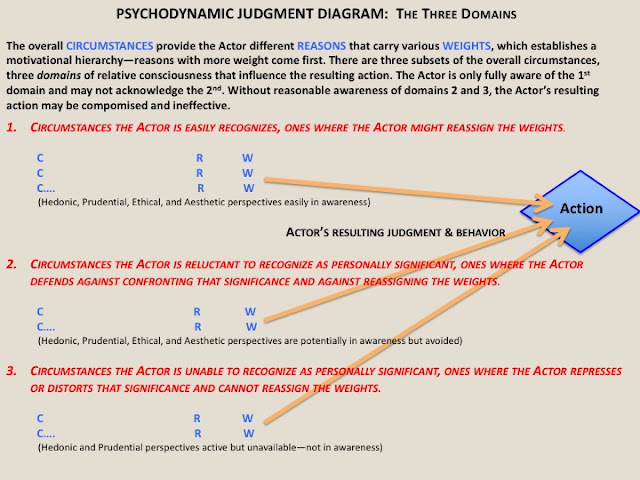 THE RESULTING BEHAVIOR IS A COMPROMISE THAT REFLECTS THE THREE DOMAINS

NOTES FOR THE PSYCHODYNAMIC JUDGMENT DIAGRAM

The overall circumstances of a person’s self and world provide the opportunities and dilemmas that are the context for judgment and behavior.  Appraisals of opportunity and dilemma motivate and guide behavior.  The known overall circumstance, the behavioral context, provides a complex domain of sub-circumstances.  An overall appraisal takes into account, more or less, the appraisals of the sub-circumstances. The final appraisal that guides behavior may be a result of careful deliberation or a response that follows an immediate impression.  Emotional behavior is usually associated with a person’s immediate impressions but can also be the reaction to a deliberately considered or delayed appraisal.

An individual’s motivationally weighted Hedonic, Prudent, Aesthetic, and Ethical/Moral perspectives intrinsically guide what a person will seek or recognize as opportunity and dilemma and will provide fundamental reasons to do one thing rather than another.  Briefly defined:  Hedonics refers to the ordinary pursuit of pleasure including the visceral pleasures.  Prudence refers to self-interest and self-protection. Aesthetics involves the mixed categories of beauty, elegance, truth, rigor, objectivity, closure, and the like.  A person’s ethics and morals concern their appraisal of fairness, justice, “the level playing field”, “the golden rule”, and the like.  Action often involves complex recognitions and reasons. Compromise and conflict are unsurprising and often inevitable.

Ethical and aesthetic appraisals require the ability to engage in Deliberate Action, i.e., the potential to make a choice. Ethics and aesthetics require the potential for renunciation. Hedonic and prudent motivations only require that the actor recognize some desired goal whether or not choice is involved. The actor’s personal characteristics are shown in how they weigh hedonic, prudent, ethical, and aesthetic reasons for action.  These motivations may be independent, complementary, antagonistic, and so on.

In making a judgment, the actor as self-critic can attempt to renounce or reorder self-recognized motivational priorities. Non-acknowledged priorities are not open to deliberation and are problematic when the self-regulation of those values is critical to the person’s wellbeing and place in the community.

Communities commonly find unregulated hedonic and prudential behavior, especially sexual or hostile manifestations, problematic and attempt to regulate them accordingly. Motivations for sexual and hostile behaviors are often problematic for some people to recognize in their own action.  What is problematic when not adequately regulated becomes especially problematic when it is cannot be acknowledged.

Here's a dynamic framework for the transformation of what a person finds unthinkable into thinkable or intolerable into tolerable.  This is the behavioral logic of defense:  What is unthinkable does not have a place in a person's knowledge of themselves and their world. What is intolerable does not have a place in their values or competencies. They can't think it and they can't manage it but they have to do something about it.

THE LOGICAL STRUCTURE OF DEFENSIVE DISTORTION

1. The empiricist principle. A person finds out about the real world by observation. The observer will have a range of specific concepts and personal characteristics that will limit his observation.

2. For a given observer, the real world is the one that includes him as an observer. (For no one is the real world a place where they have no place. This is a formal constraint. For no observer is the real world one that would leave him in an impossible position. (A person’s vantage point concerns the range of that person’s possible observations, descriptions, and critiques).

If, for a given observer, O, the real world is such that it would leave him in an impossible or intolerable position, he will not see it that way. Instead, he will see it as a world that does have a place for him, and he will act accordingly.

A second observer, P, who sees the world differently from O and knows it, can count that difference as O’s distortion of reality.

P can account for O’s distortion by reference to some real condition that O would find unthinkable (because it would leave him in an impossible or intolerable position) and therefore be unable to behave with respect to it.

1. Among such unthinkable real conditions would be that O’s behavior was a particular behavior or that it had a particular motivation or significance (hence unconscious motivation).

2. Because the derivation above is a statement of logical constraints, the conclusion and the phenomenon is non-voluntary and automatic (hence one can speak of mental mechanisms).

3. Because the effect of the logical constraints is that the person continues to function more or less effectively when otherwise he would be unable to function, one can speak of the mechanisms as preserving realistic functioning or as ego defensive.

4. The second observer, P, could establish a taxonomy of the kinds of distortions O was engaging in.  If the distortions were explained by the operation of mechanisms, the taxonomy could be identical to that for ego defense mechanisms: denial, repression, projection, reaction formation, etc.